Should You Wake Up Your Dog When They’re Having A Bad Dream?

There are few things cuter than watching a dog dream. Their legs twitch and eyes flutter, and they make cute little yipping sounds in their sleep. The best is when their tail starts wagging even with their eyes are closed. Research has long-since proven that dogs are capable of dreaming in the same way humans do. And just like us, not all of those dreams are good.

While we can’t know for sure, it makes sense that dogs occasionally have bad dreams. The thought of our precious pups feeling distressed in their sleep makes us want to step in and help. But is that really what’s best?

If you think your dog is having a bad dream, should you try and wake them up? 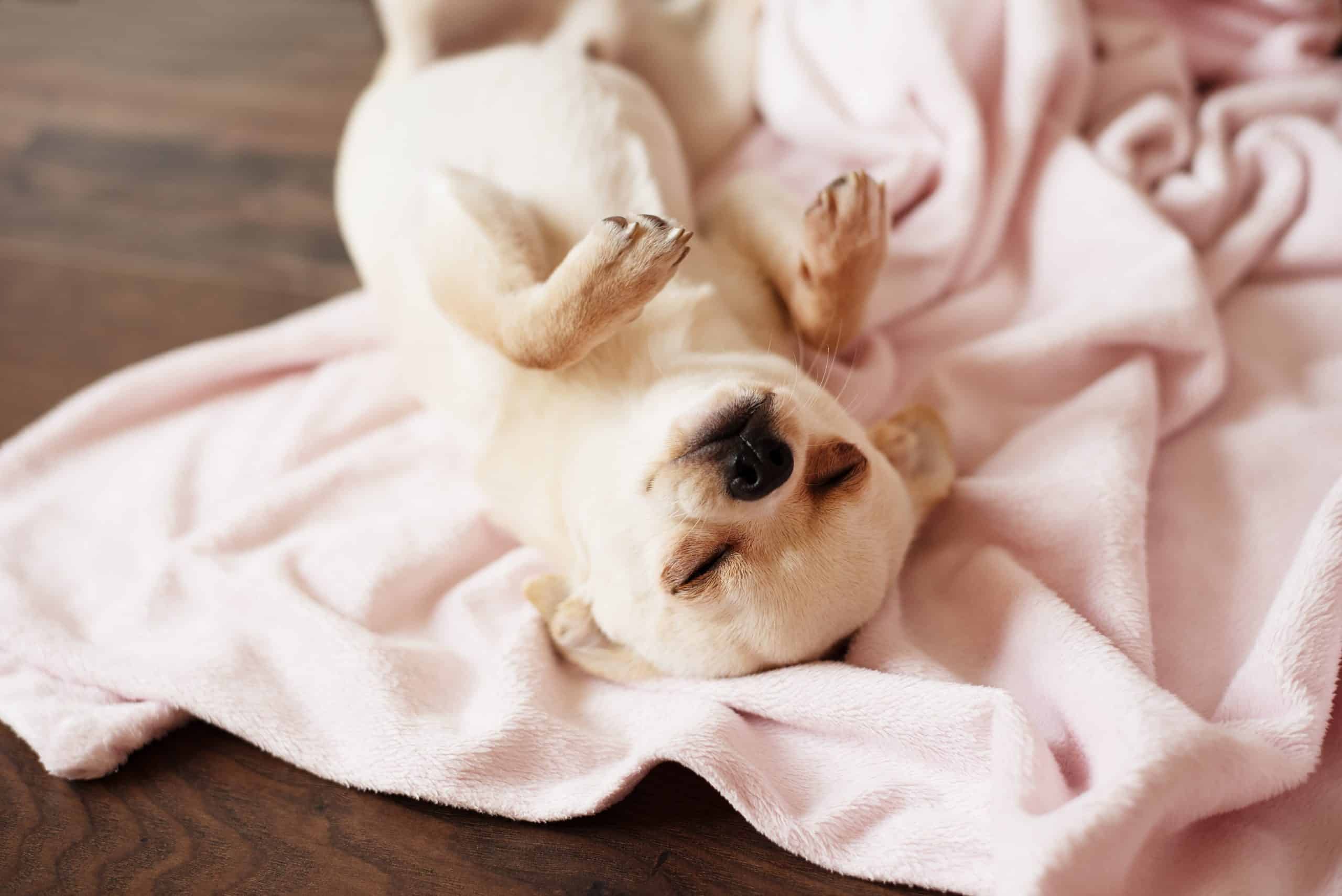 There’s no simple answer, but…

The general consensus is that it’s NOT a good idea to wake up a dreaming dog–even if that dream is a nightmare.

Dogs have similar sleep patterns as humans. That means they get the most rest during their REM sleep cycle. This kind of sleep happens in intervals, and it’s characterized as being a deep sleep involving rapid eye movement and brain activity. It also happens to be when most of your dog’s dreaming happens.

Waking up your dog during a dream rips them out of that important REM sleep. It disrupts their overall sleep cycle, and that could have consequences regarding the dog’s health and well-being.

Think about it: aren’t you cranky when you are woken up during a deep sleep? And isn’t it sometimes hard to fall back asleep? Continually waking up your dog every time they have a dream isn’t a good idea. 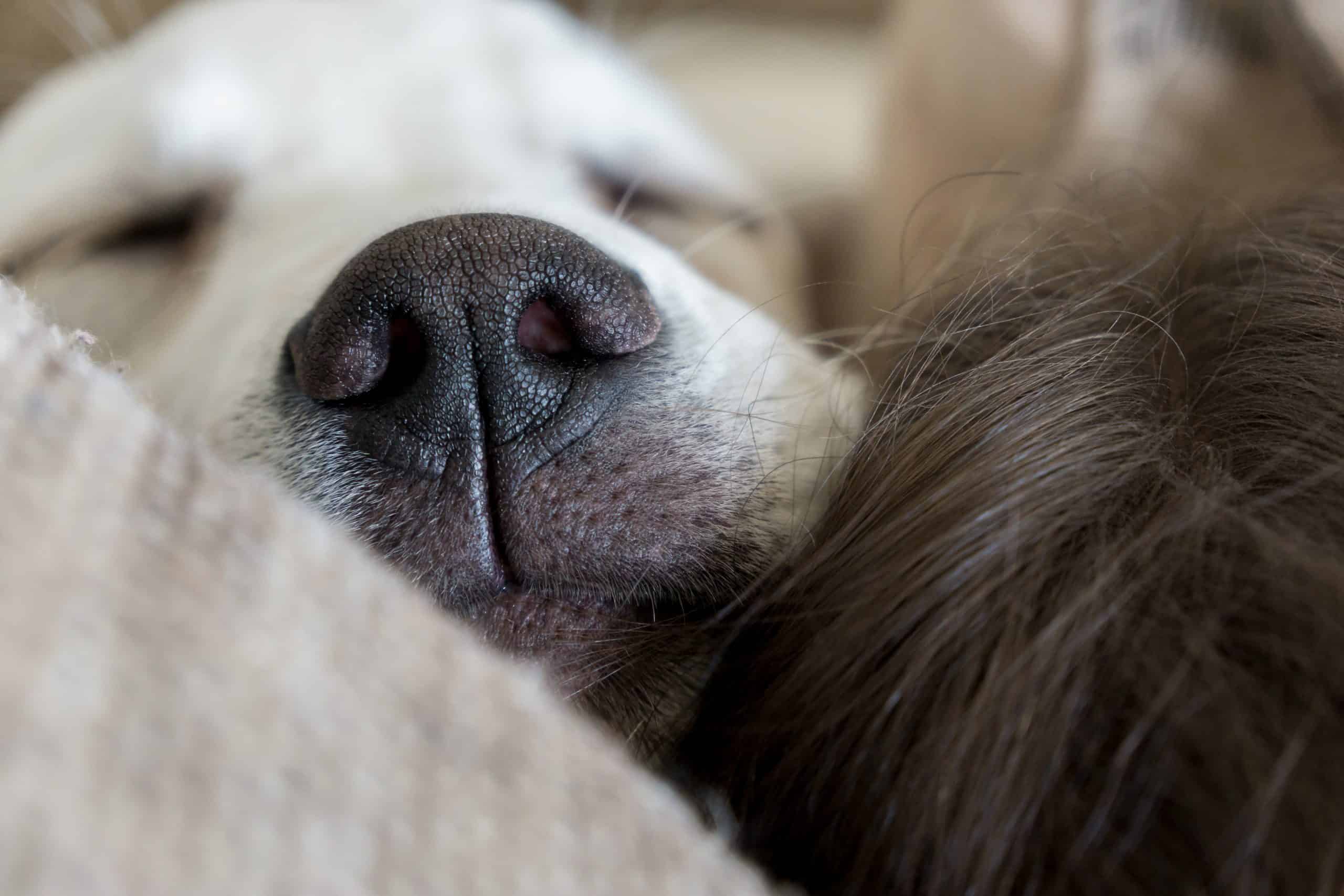 Besides disrupting your dog’s REM sleep, waking them up also poses a safety risk. Abruptly being pulled from a dream state back into reality can cause serious disorientation. It could take several seconds for your dog to realize they’re suddenly awake, and it’s impossible to predict how they’ll react.

Even the friendliest, most well-behaved dog can have a violent reaction after being woken up from a particularly vivid dream. I learned this lesson from an experience with my dog Copper. He sleeps in bed with me, and one night, he started kicking and whimpering in his sleep. He woke me up, and in my sleepiness, I nudged him trying to get him to stop kicking me.

I woke him up, and he shot up onto his feet and let out the nastiest snarl I’ve ever heard from him. He recovered himself quickly and laid back down like nothing happened, but it was still a startling experience for both of us. He could have thought I was a menacing figure from his dream and bitten me. 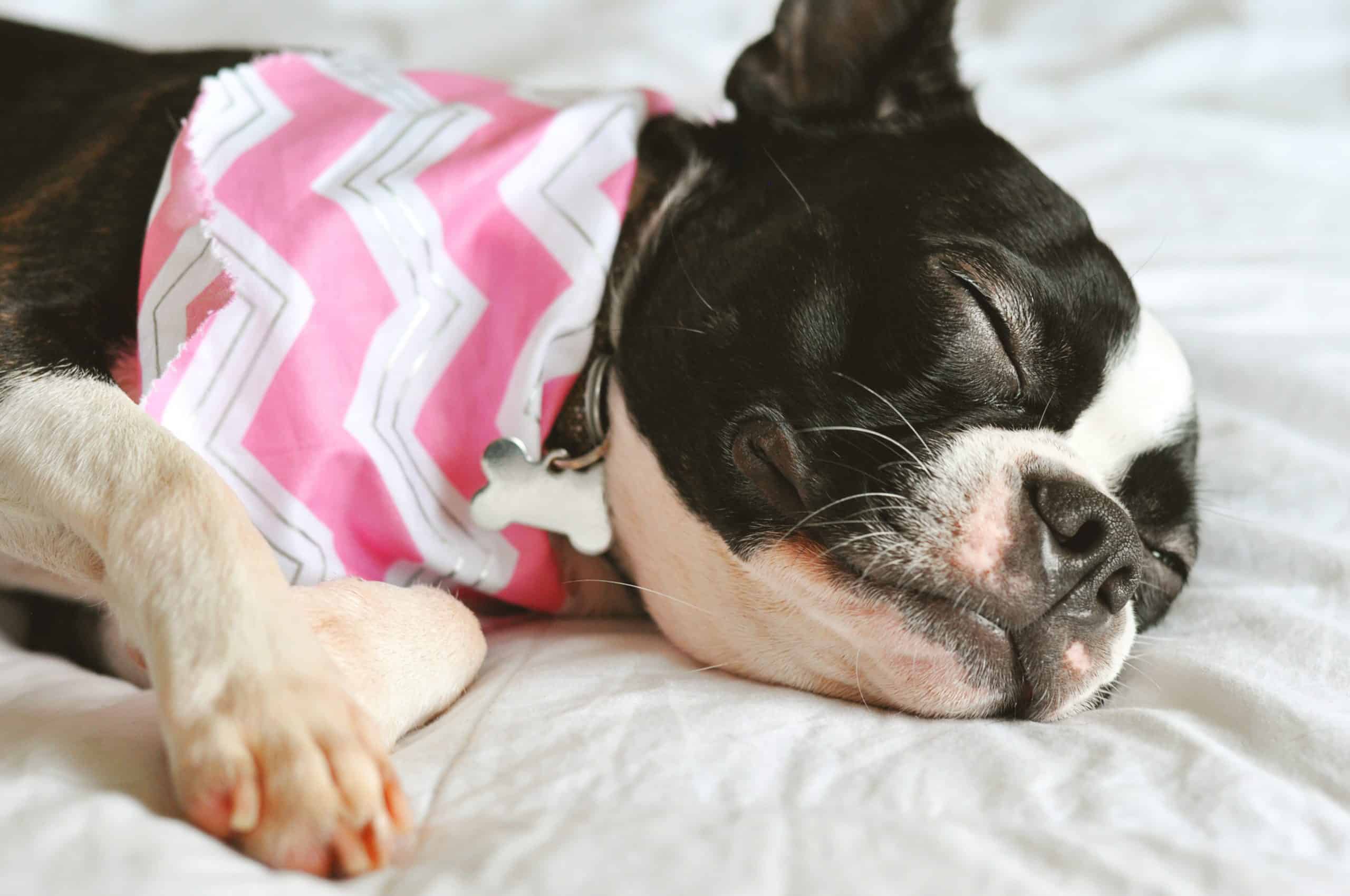 What if you absolutely need to wake up your dog?

Since that night with Copper, I’ve made it a rule to let sleeping dogs lie.  Most of the time, he seems to dream about happy things. I imagine he’s chasing squirrels, digging holes, and probably eating really good food. Dogs dream about things that are either related to their current life or something that happened in the past. So if your dog has a fairly cushy life with a family that loves him, most of his dreams are bound to be pleasant.

You can’t tell what your dog is dreaming about by looking at them, but pay attention to their body language. Paddling their legs could mean they’re running in their dream, and little yips could be happy barks. A wagging tail obviously means something fun is going on.

But if your dog looks tense, afraid, or cries out in distress, they might be having a bad dream. If you’re convinced that your dog is having a terrible nightmare and want to wake them up, make sure you do it in a safe and respectful way. 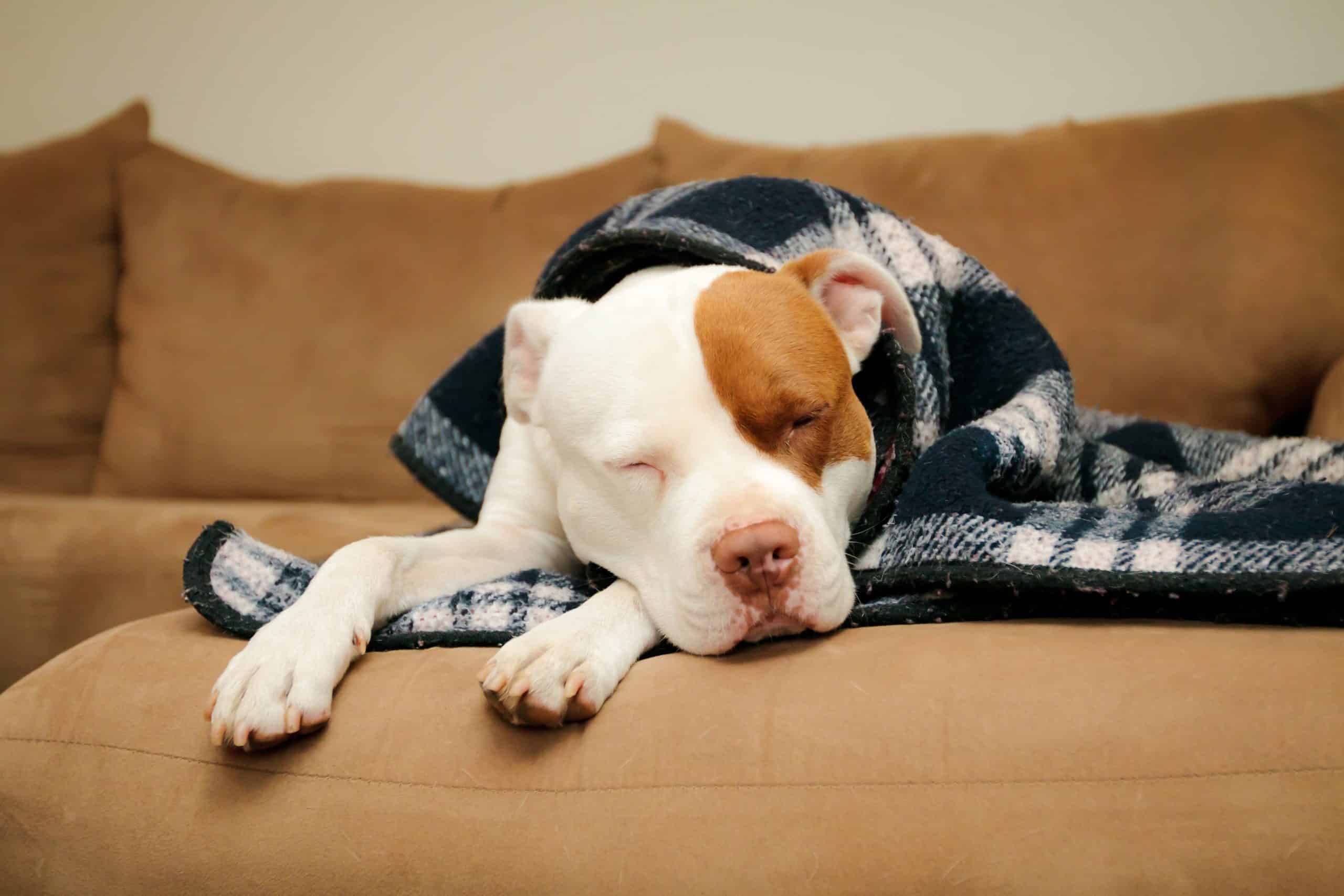 Don’t touch or get too close.

You don’t know how your dog will react when they wake up, so it’s best to keep your distance. Touching them when they’re already on edge due to a bad dream could make the situation worse.

Instead of poking, prodding, or petting, use only your voice. Say their name in a gentle, loving tone. Sometimes, your voice will be enough to break through the nightmare and calm your dog’s mind without waking them up. And if it doesn’t, it’s better if your dog wakes up slowly rather than abruptly.

Do you know why dogs suck on blankets? Find out here! 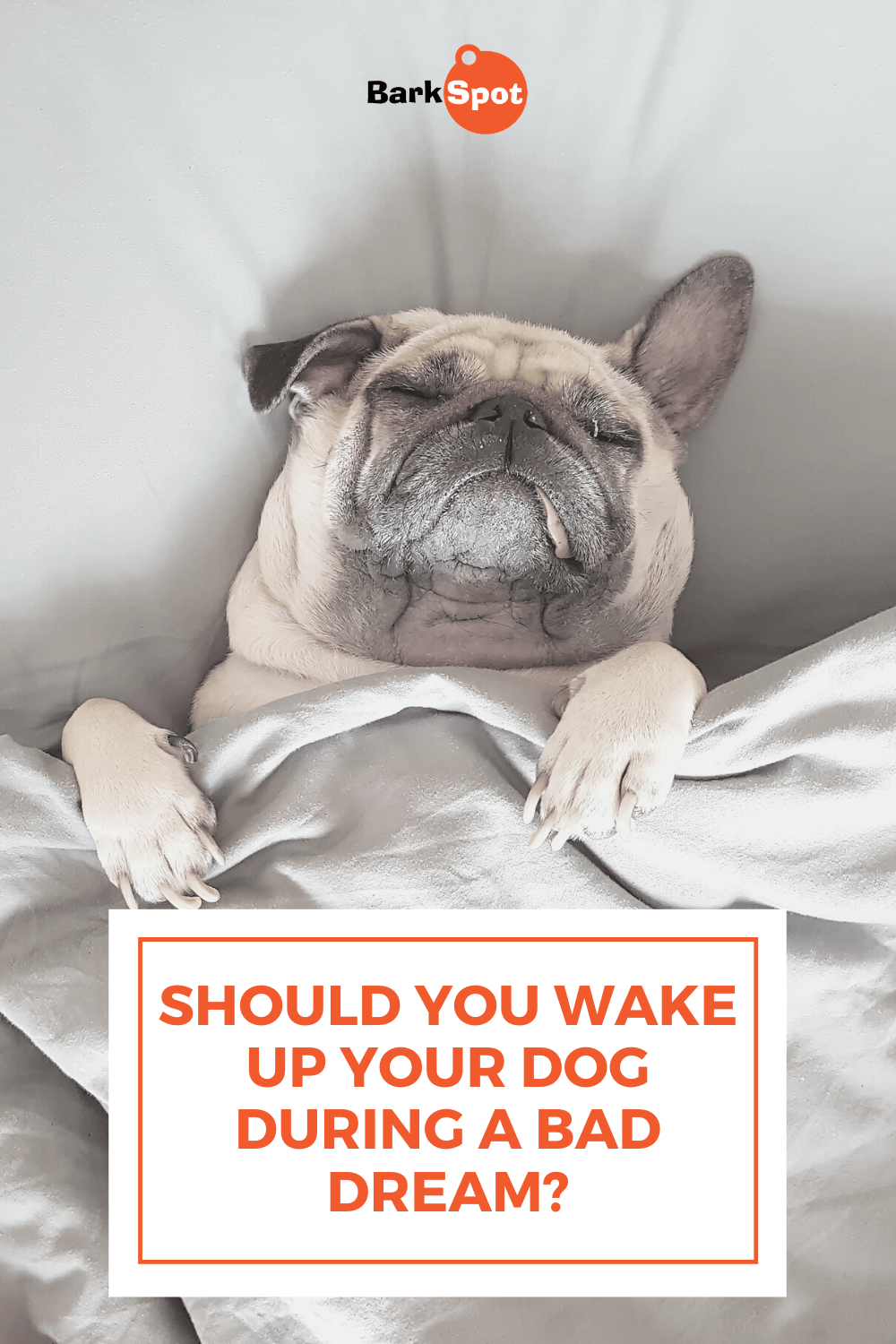