From paper and cardboard to stuffed animals, pillows, and clothing, nothing is truly safe when you have a dog that likes to shred things. Destructive behavior is a common issue among all our canine friends. It’s not limited by a dog’s age or breed, and dogs shred things for a few different reasons.

If you’re constantly worried about what your dog is going to destroy next, the first thing you need to do is understand why it’s happening. Once you have an idea of what’s causing the behavior, you can work on preventing the destruction and protecting your stuff.

Here are a few of the most common reasons why dogs shred things. 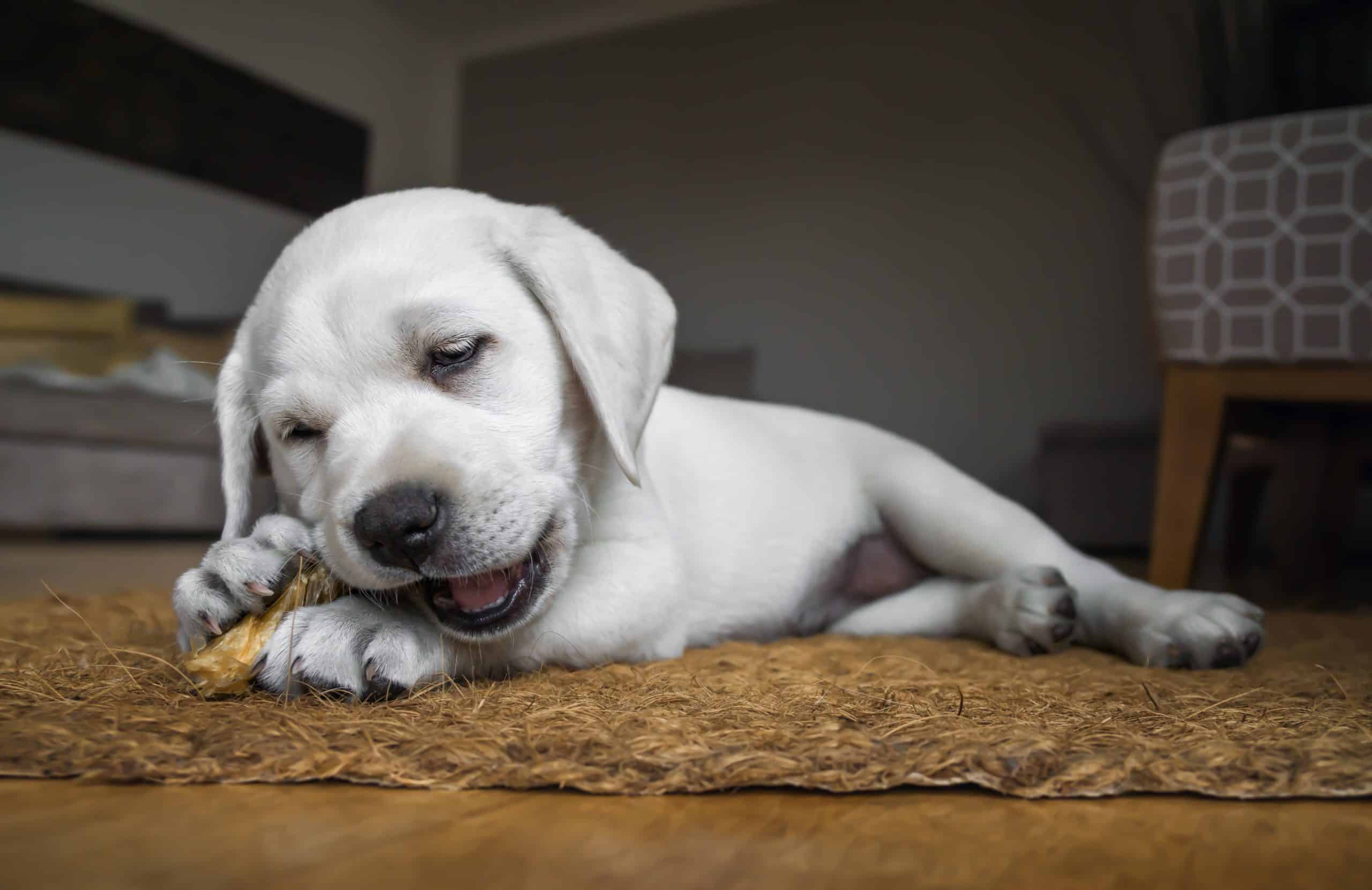 If you recently brought home a puppy, destructive behavior is almost a guarantee. Your pint-sized pup is learning about the world. And like a human baby, a lot of that exploration involves putting things in their mouth.

Chewing is something you can’t avoid with puppies. They all do it, and it’s pointless to get mad about it. Their baby teeth are falling out and making room for their permanent teeth, and that process is almost always painful. Chewing helps relieve that pain, and it’s also fun.

Part of your job in raising a puppy is learning to curb that behavior and teach your dog what they can and can’t put their teeth on. Make sure your puppy has plenty of quality chew toys. Experiment with different kinds to find something your pup likes best.

Besides general puppy behavior, boredom is the biggest culprit behind why dogs shred things. When your dog has nothing to do and a day’s worth of pent-up energy to deal with, shredding everything in sight sounds like a great way to pass the time. Bored dogs will look for any way to entertain themselves. 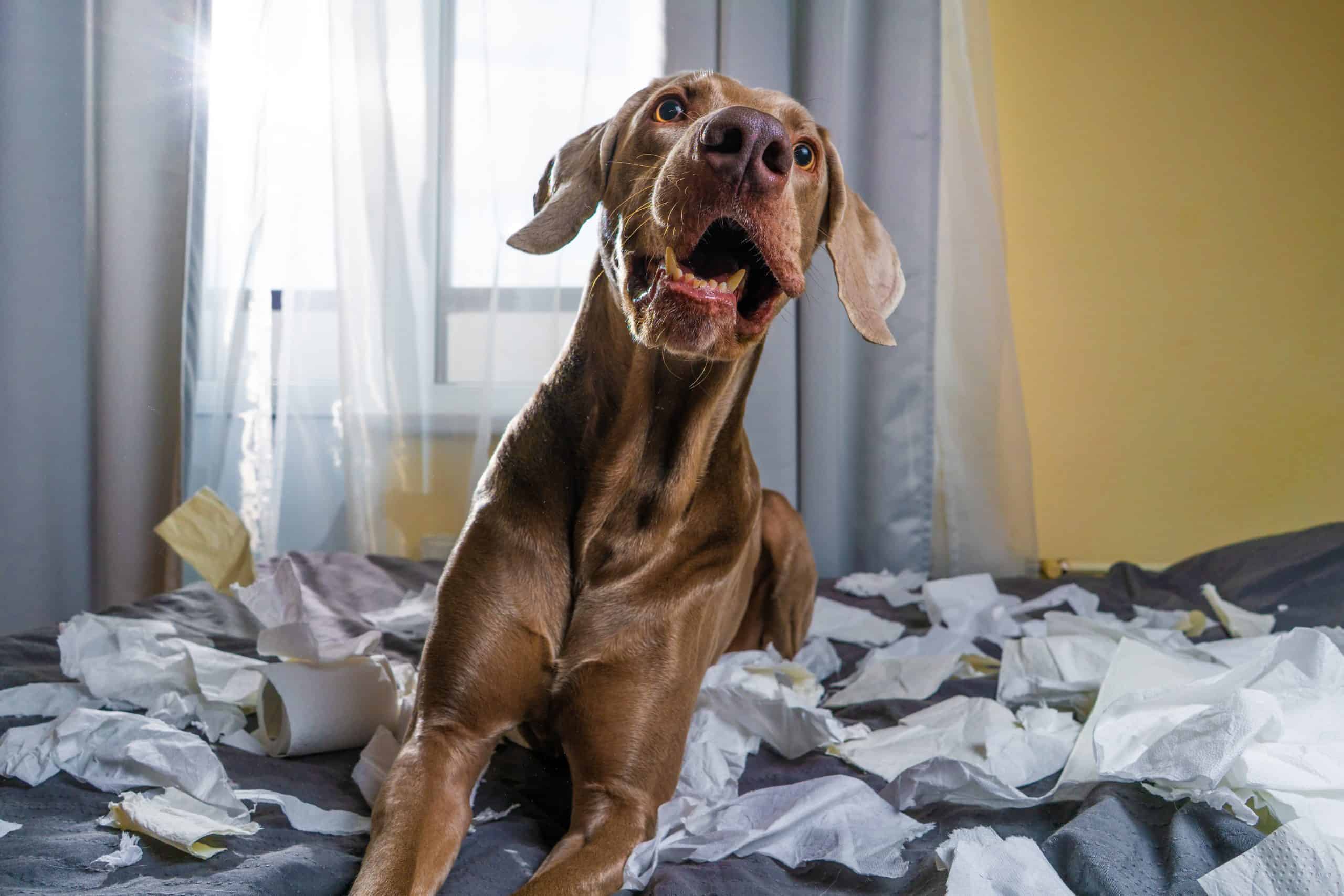 When I first adopted my dog, he was King of Destruction. He ruined a lamp, a computer mouse, several shoes, and probably other things I can’t remember. I soon realized that he had way too much energy, and he didn’t know what to do with it. We were going on daily walks, but those exercise sessions weren’t enough to curb his boredom.

If your dog is bored, there are a lot of things you can do to help. For most dogs, all they really need is more exercise. You can also provide them with interactive toys that offer both physical and mental stimulation. Training is also a good way to deal with canine boredom.

I know I’ve said this before, but puppies (and even adult dogs) are a lot like human kids. When a child is stressed or anxious, it’s pretty normal for them to express those feelings by either acting out or picking up some kind of compulsive behavior. Dogs are the same way. 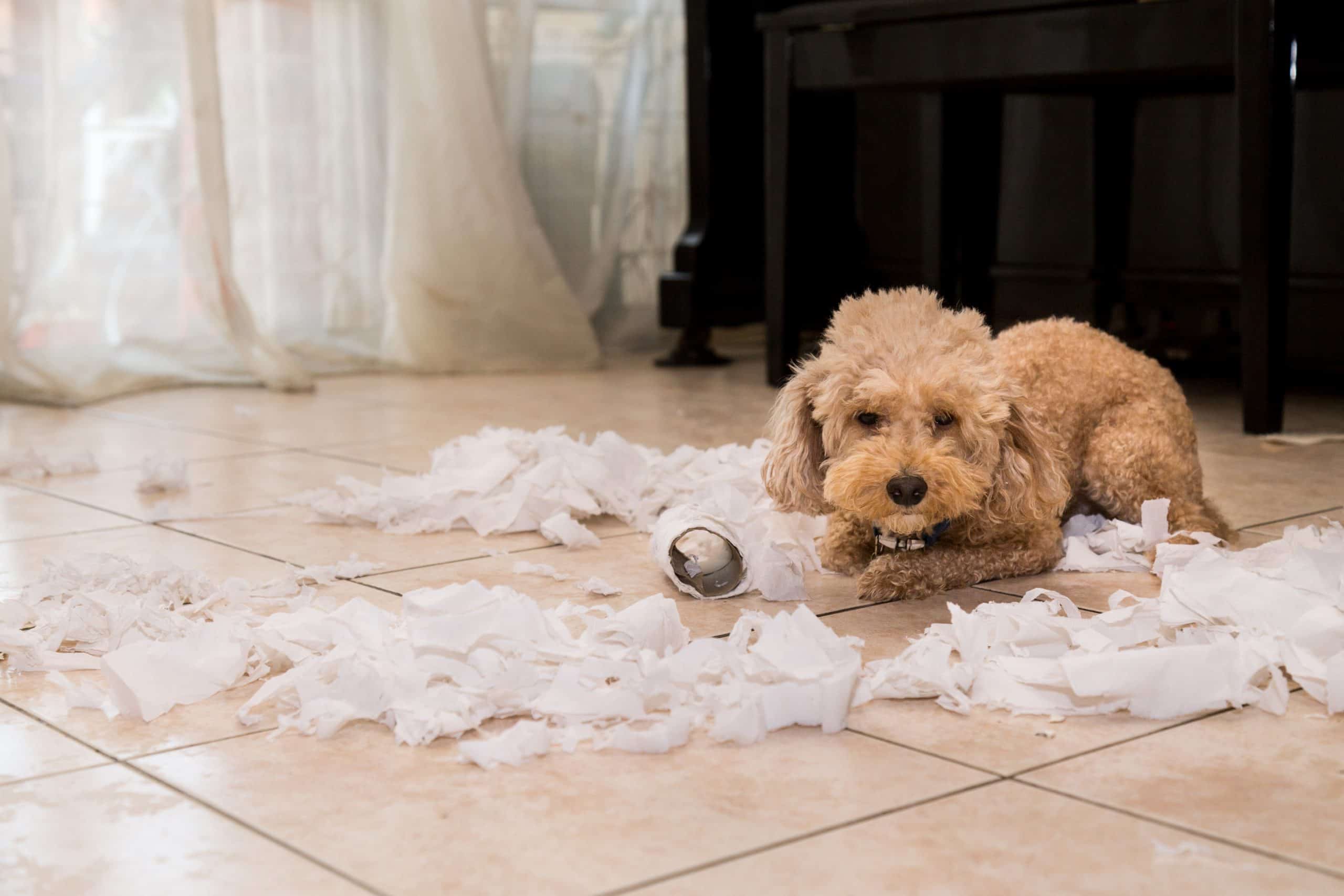 Sometimes when dogs shred things, it stems from a deeper feeling of negativity. They’re so overwhelmed with stress, anxiety, or nerves that destroying something acts like a kind of pressure relief valve. It helps them let go of pent-up feelings and gives them something else to think about.

There are countless reasons why a dog might be stressed out. Some dogs are naturally more prone to anxiety than others, but all dogs can occasionally suffer from bouts of general unease. Maybe your dog has separation anxiety and panics every time you leave the house. Or maybe a change in routine has a dog confused and worried about what’s going on.

The best way to help and prevent the destructive behavior is to identity exactly what your dog feels so strongly about. From there, you can take steps to make them feel more comfortable.

There are some animal behaviorists who believe dogs shred things because it’s part of their natural instinct as a predator. Certain dog breeds have high prey drives, and the act of ripping their teeth through something could spark an ingrained instinct related to taking down prey animals. That theory is further supported when dogs have an obsession for shredding their toys and ripping out the squeakers. 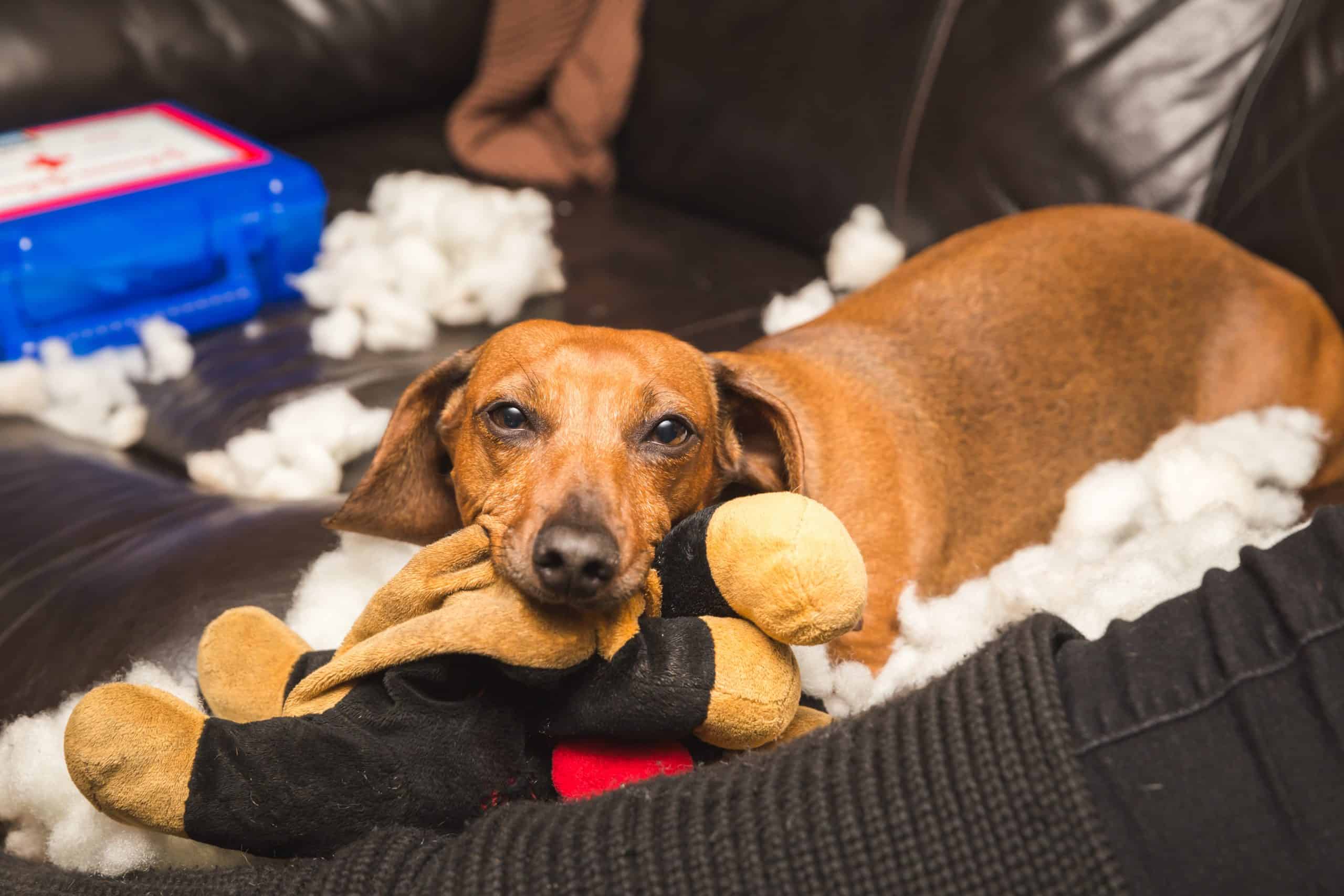 But even if dogs aren’t imagining themselves as apex predators, a lot of our pampered house pets like to rip things simply because it’s fun. The first time they did it, it might have been because they were teething, bored, or stressed out. But once they felt the satisfaction that comes from ripping something to shreds, they decided it was a new favorite game.

In some cases, we’re the ones that (accidentally) convince our dogs that destroying things is fun. Even though we’re annoyed, we have to admit it can be pretty adorable to see our dogs sitting guilt-free amidst the rubble of their destruction. A lot of times, we pull out our phones and take pictures. We unintentionally encourage the behavior and make our dogs think that shredding things is super fun.

Help! The shredding is out of control!

If you’ve already tried different training methods to stop your dog’s destructive behavior, my best advice is to talk to a professional trainer or behaviorist. When I was having trouble with my dog, a behaviorist helped me put together a daily routine to get my dog’s behavior under control.

It included physical exercise twice a day, two training sessions a day, serving meals in interactive ways, and “time outs” when his behavior got especially bad. After a few weeks of this, I saw an incredible improvement. He still gets into occasional trouble, but I haven’t lost a shoe or lampshade in years.

Don’t let your dog’s destructive behavior ruin your relationship. The desire to shred things is completely normal for dogs, and you are 100% capable of finding a solution. It might take a few weeks or months, but be consistent. And most importantly, don’t give up!

Up Next: Check out this list of dog training tips that I wish I had known when I first adopted my dogs. Click here for the list. 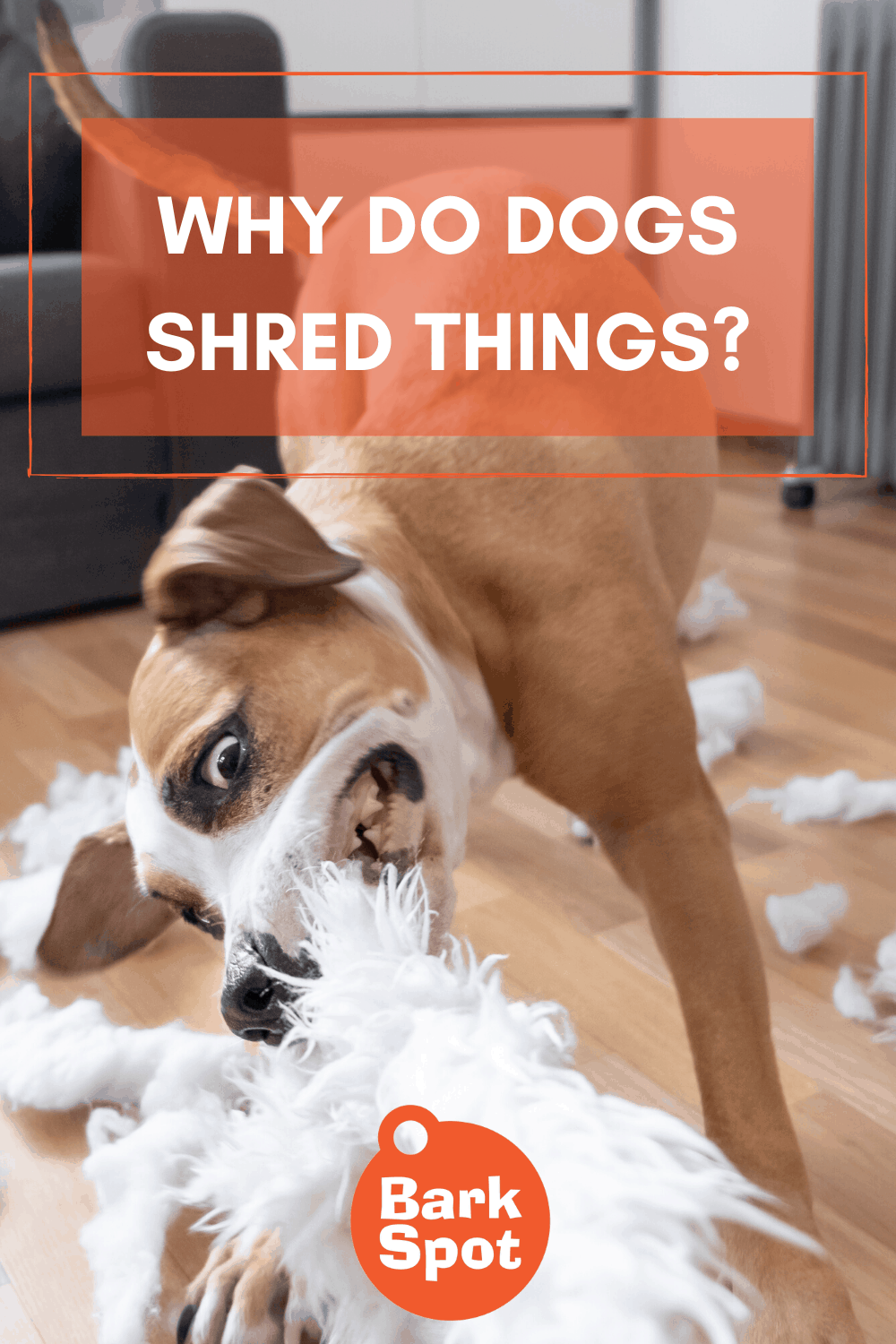