Top Posts
What To Do If Your Dog Is Stung...
The Seven Most Dog-Friendly Cities Around the World
Canine 411: Beagle Mix – Everything You Need...
Tips For Identifying Dog Fleas And Top Flea...
Anxiety Medication for Dog Anxiety – All You...
Want Another Pup? Here’s How To Know When...
The Ultimate Guide for The Cavoodle Dog Breed
Helpful Tips On How To Teach Your Dog...
The Truth About Ear Cropping: Why You Shouldn’t...
5 Off-Leash Dog Beaches In The US Your...
Dog Breeds

11 Facts Everyone Should Know About American Staffordshire Terriers

The American Staffordshire Terrier is one of the most misunderstood dog breeds in the country. It suffers from breed stereotypes and has a tenuous reputation that has led to several cities banning the breed altogether.
Very often labeled as an ‘aggressive dog bred purely for dogfighting, this gentle-hearted dog is actually quite the opposite in nature.
But despite breed-specific legislation, the AmStaff is still a popular dog breed in the United States. Those who treat these dogs with love and respect get to see their true nature as loyal family dogs.

How many of these breed facts did you already know? 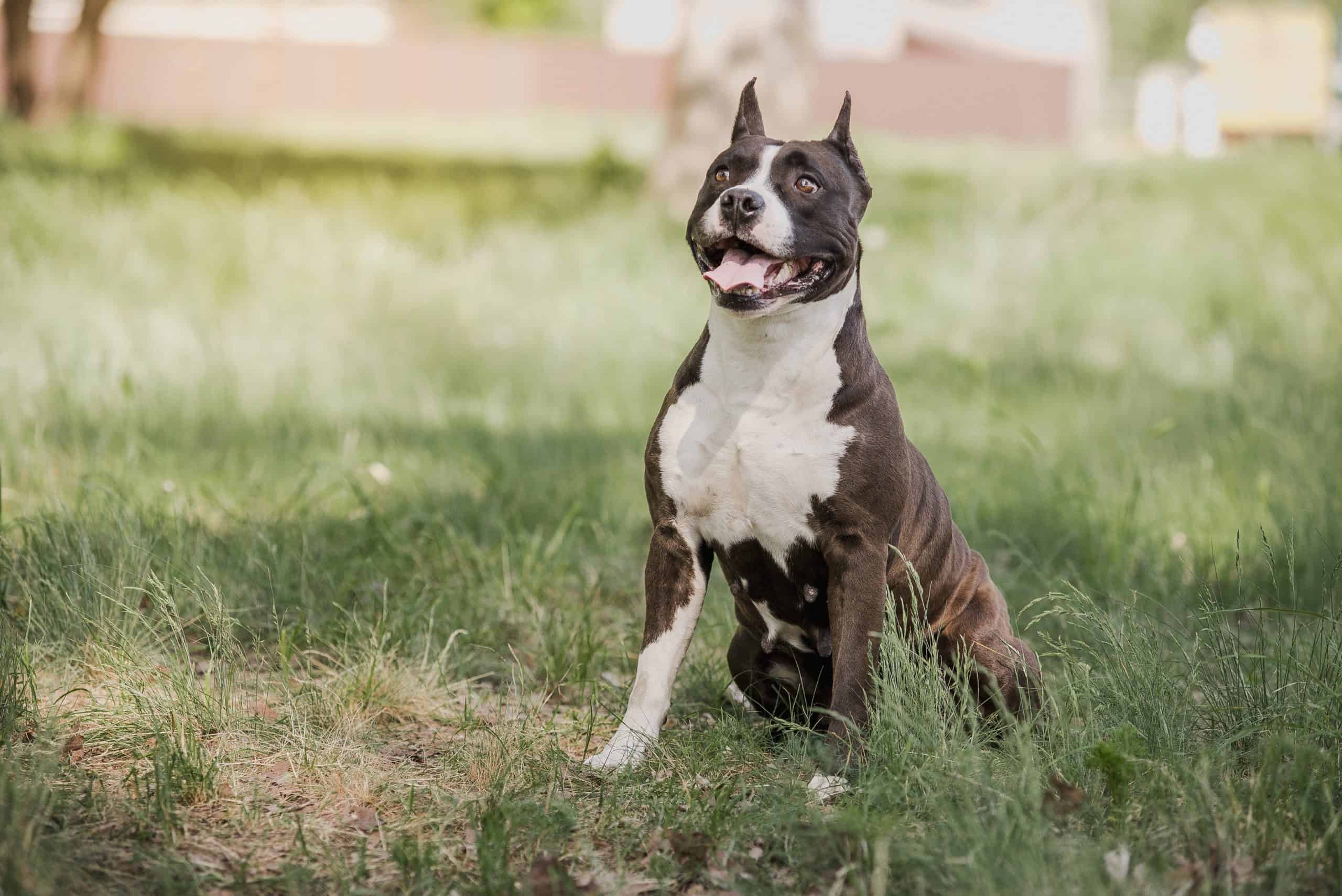 It’s still unknown what exact breeds were used to create the AmStaff, but experts agree that the Bulldog played a big part in their makeup. Other breeds most likely include the extinct White English Terrier and Black-and-Tan Terrier.

Many years ago in Great Britain, there were a variety of different dogs specifically bred for blood sport. This was mostly to satisfy a sick desire of many spectators and have thankfully been outlawed and dogfighting marked as illegal.

Not only did the American Staffordshire’s reputation suffer due to its sad history, the Mastiff, Pitbull, Bulldog, and the Bull Terrier are also labeled as an aggressive dog breed.

Once the breed made it across the pond, Americans started breeding the dogs to make them bigger. Eventually, the AKC recognized the American Staffordshire Terrier as a completely separate breed than the English version–the Staffordshire Bull Terrier.

Luckily, in this day and age, the American Staffordshire is considered to be a more relaxed, fun, and loyal dog compared to its aggressive past.

Fun fact: America’s most decorated American war dog was an AmStaff named Sgt. Stubby was a K-9 of World War 1. He was admired by three different presidents in his lifetime.

3. The breed has a long history of being used in fights.

American Staffordshire Terriers combine the strength of the old-style English Bulldog with the energy and fearlessness of the terrier. They were often used to either fight each other or forced to fight other animals, including bears. 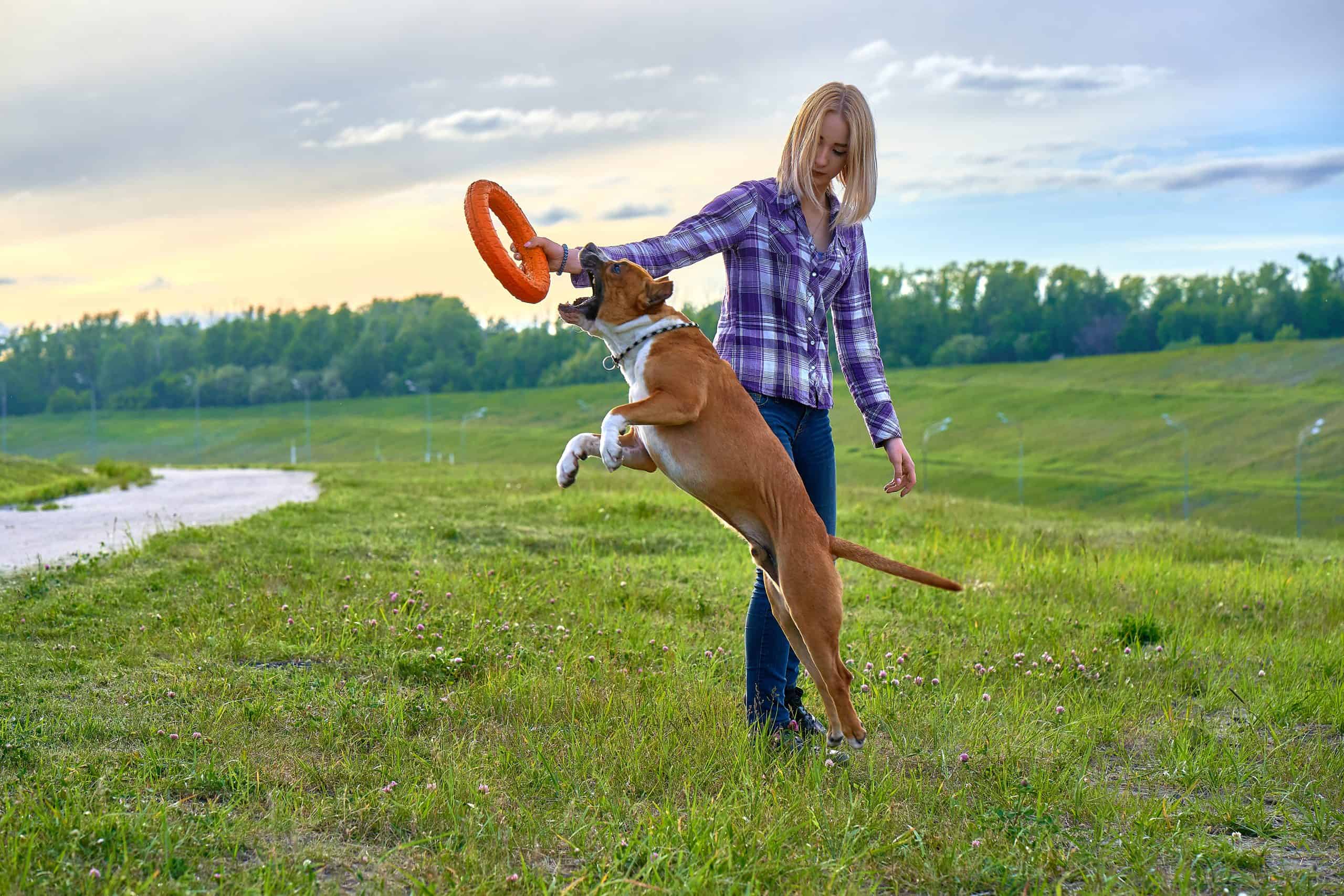 4. They were bred to fight animals, but aggressiveness toward humans was deemed an undesirable trait.

Handlers needed to be able to safely control their dogs and were often with them in the ring. For that reason, people bred them to be friendly and loyal toward humans.

5. American Staffordshire Terriers were also bred to be great farmhands.

The strong and loyal dogs worked to protect their families and livestock and were also used for hunting.

6. The belief that American Staffordshire Terriers have the ability to “lock their jaws” is a myth.

No dog breed can lock their jaw. AmStaffs are simply incredibly strong. 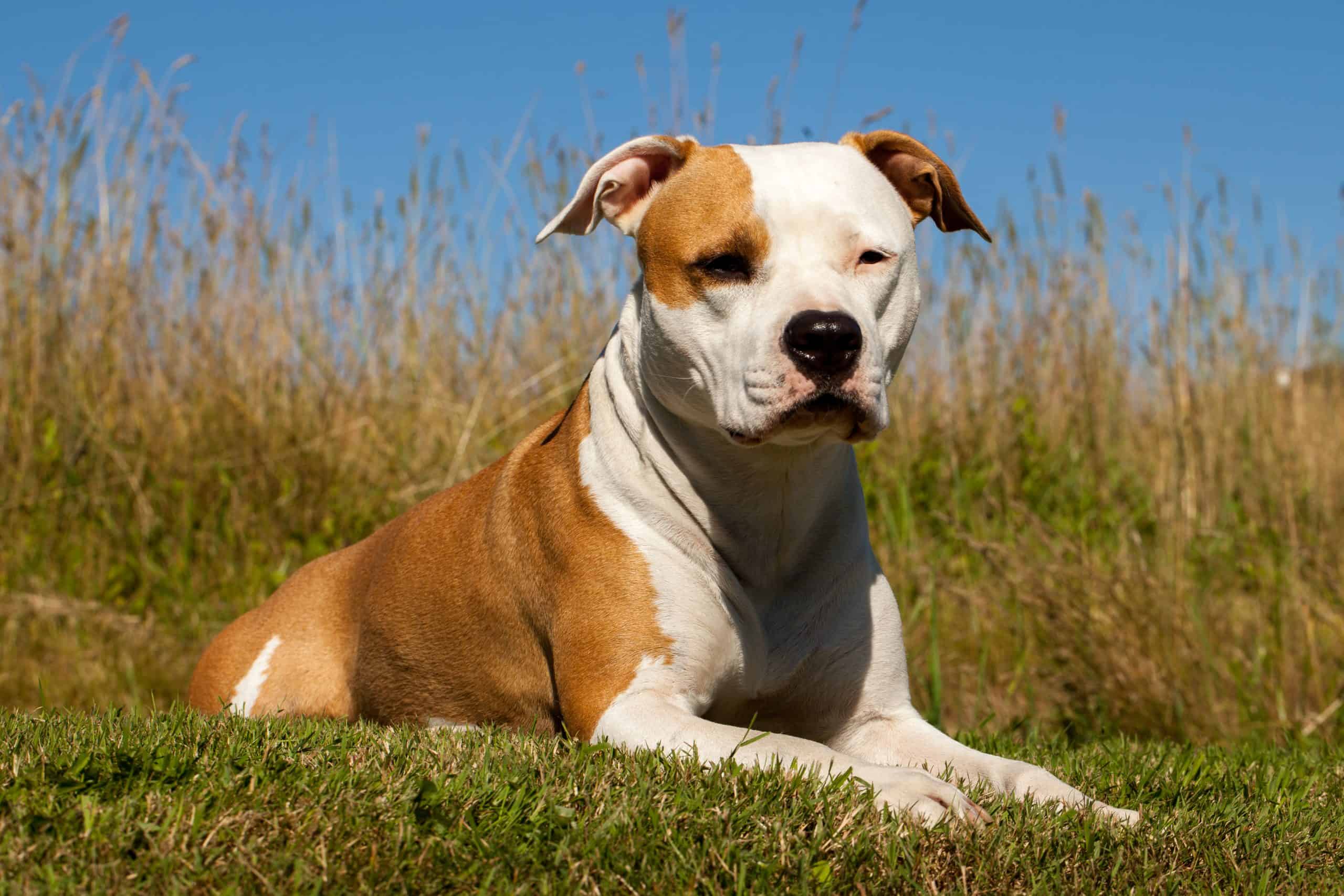 Many people think that the American Staffordshire Terrier is the same as the American Pit Bull Terrier, but this is incorrect.

8. An AmStaff named Bud rode along during America’s first cross-country road trip in 1903.

Bud went down in history and saw more of the country than most people did back then.

The latest data gives them a score of 85.5%, which is better than the Beagle, German Shorthaired Pointer, Chihuahua, and several other popular breeds. 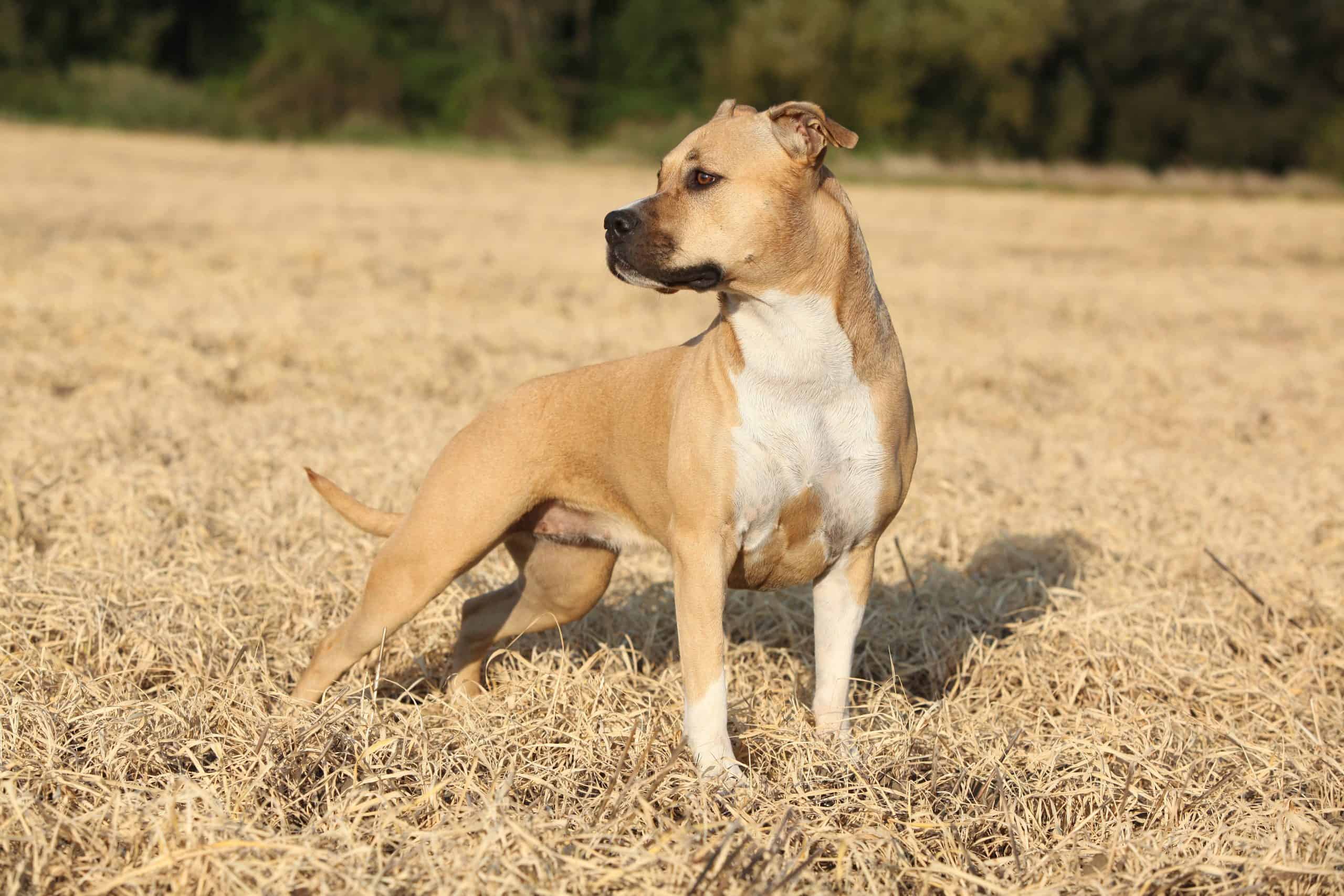 They would be a good partner to have if you need protection from a wild animal, but they’re poor guard dogs if you want to keep people off your property. They’re too friendly and typically greet strangers like they’re new friends.

11. The American Staffordshire Terrier is considered one of the most intelligent dog breeds and is easy to train.

They are the type of dog that finds joy in pleasing people. Most pick up on new skills quickly and can be trained for a long list of jobs. They are trained as both service dogs and detection dogs.

Deeper insight into the Amstaff

The Amstaff is a strong and stocky dog terrier dog that can stand up to roughly 19 inches tall at the shoulder. Some can be somewhat stubby in their growth, but all are strong and energetic.

The American Staffordshire Terrier has a well-defined jaw and a broad head, as well as very cute ears! Their glossy short coat has many different patterns and a variety of colors.

Exercise plays an essential role in the life of your American Staffordshire. A dog with high energy levels and always game of exercise and running around, the Amstaff will need a lot of exercise. This is a breed standard amongst the terrier breed.

An energetic dog is lots of fun for the whole family! Many Amstaffs take part in various canine sports and dog shows such as obedience training as they are very clever dogs.

A large yard is not enough for the Amstaff as they need additional runs, long walks, potentially swimming, play, ball games, and obedience training to truly thrive.

Feeding your Amstaff is an essential part of its daily growth and overall health and it is important to speak with a professional vet about the best food for your dog. Finding out what nutrition is needed for the specific age of your American Staffordshire will help it develop well.

Be sure to feed your dog with high-quality dog food and monitor your dog’s weight as some dogs can become overweight.

An American Staffordshire Terrier puppy will have specific needs as a young puppy which will change over time as the dog evolves.

Like all dog breeds, the American Staffordshire is prone to certain health problems and illnesses. Be sure to speak to your vet if your Amstaff is experiencing any symptoms or acting differently.

On average, the life expectancy of an Amstaff is 12 to 16 years. The American Staffordshire Terrier is generally considered to be a healthy dog breed and with care, good food, daily exercise, and a lot of love your Amstaff will enjoy a happy life!

Caring for your American Staffordshire

Apart from consistent daily exercise and play, consider frequent grooming, bathing, and flea treatments. Brushing your dog once a week with a soft-bristle brush will help with their beautiful coats, especially brindle-colored Amstaffs!

Clip and trim your Amstaffs nails on a regular basis and check their teeth often too.

Early socialization will help your dog be comfortable with people as well as other dogs, and, given the American Staffordshire Terriers ‘aggressive’ past, it is a good idea for dog owners to take them to puppy training and socialization from the start.

Like learning about dog breeds? Learn about the Labrador Retriever next! 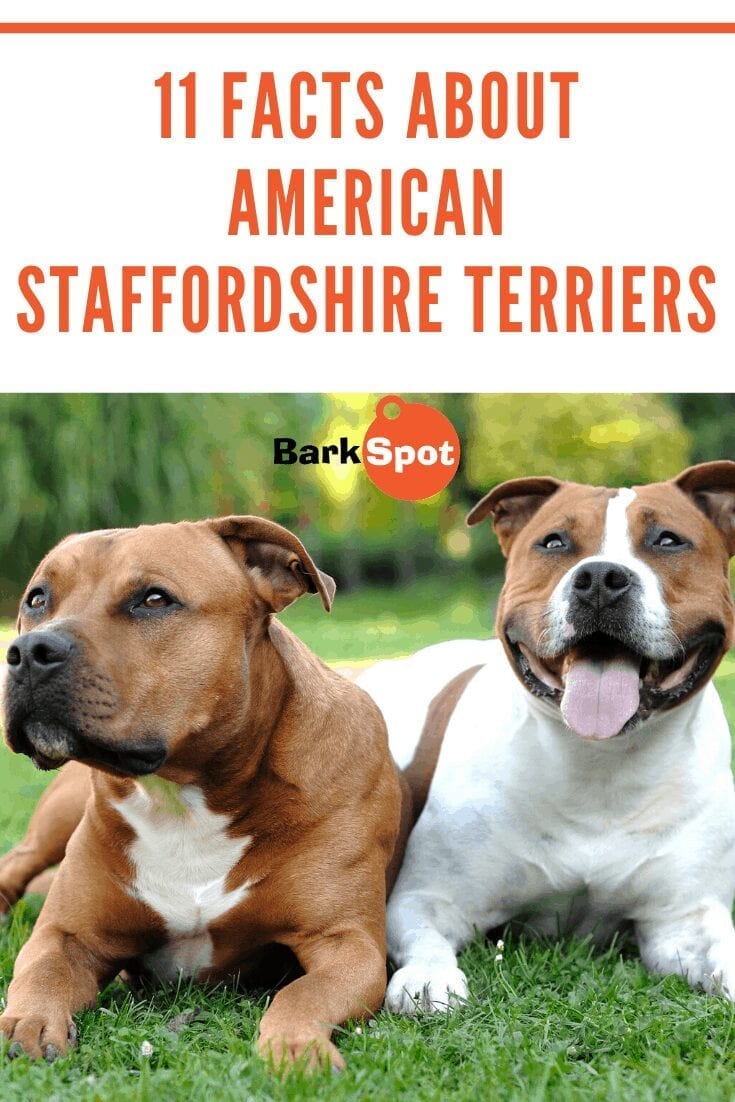