Top Posts
What To Do If Your Dog Is Stung...
The Seven Most Dog-Friendly Cities Around the World
Canine 411: Beagle Mix – Everything You Need...
Tips For Identifying Dog Fleas And Top Flea...
Anxiety Medication for Dog Anxiety – All You...
Want Another Pup? Here’s How To Know When...
The Ultimate Guide for The Cavoodle Dog Breed
Helpful Tips On How To Teach Your Dog...
The Truth About Ear Cropping: Why You Shouldn’t...
5 Off-Leash Dog Beaches In The US Your...
Celebrity PupsDog Breeds

Finley’s unique good looks have earned him widespread fame. This Springer Spaniel has gorgeous golden eyes and the striking coat pattern typical for his breed, but it’s the hair on top of his head that grabs all the attention. Complete with beachy waves and brilliant highlights, Finley’s hair looks like it belongs in a shampoo commercial.

Look at this gorgeous Springer Spaniel!

According to Finley’s mom, Becca, the famous Finley’s signature hairstyle started when he was around six months old. During those puppy months, the hair on top of his head formed a mohawk any rockstar would want. And as the puppy grew up, so did his hair.

Becca is obviously smitten with her good-looking dog, and after sharing a few photos of Finley online, thousands of others have fallen in love. Finley now has his own Instagram account with nearly 15,000 followers. He’s earned sponsorships from popular pet product companies, and he was even featured in a commercial for the organic food delivery service, Abel & Cole.

When Finley isn’t posing for the camera, Becca says he loves to spend time outside. She told BarkSpot,

“Finley absolutely loves getting soggy! He would find a puddle in a desert!”

A lot of Finley’s photos feature him dripping wet after a fun outdoor adventure. Even when he’s wet and muddy, this dog knows how to work the camera!

Becca says getting dirty is one of his favorite things to do, but he also loves his cuddles.

“As much as he is a typical Spaniel when out (getting filthy and running around like a lunatic), he is the biggest cuddle monster at home. He always has to be touching me.”

Finley even looks good with bedhead. .

As if we weren’t jealous enough, Finley’s perfect hair is fairly low maintenance. Becca brushes him regularly to prevent mats, and he gets a profesisonal groom every six weeks. Even with all the puddle jumping, Finley’s hair is naturally thick and shiny.

For Finley, life is all about finding the next puddle and doling out lots of love. Follow him on Instagram for more pictures of his handsome face!

All images courtesy of Instagram/finleythespringer 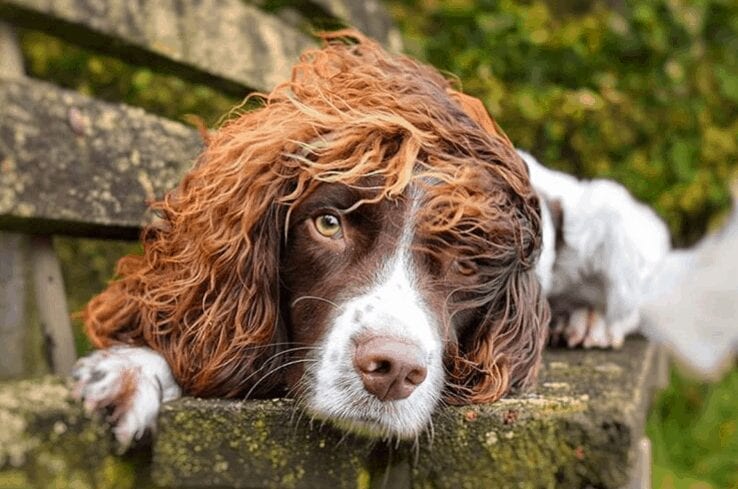 Next, meet an adorable Dalmatian that wears his heart on his nose…literally. Click here to read more.